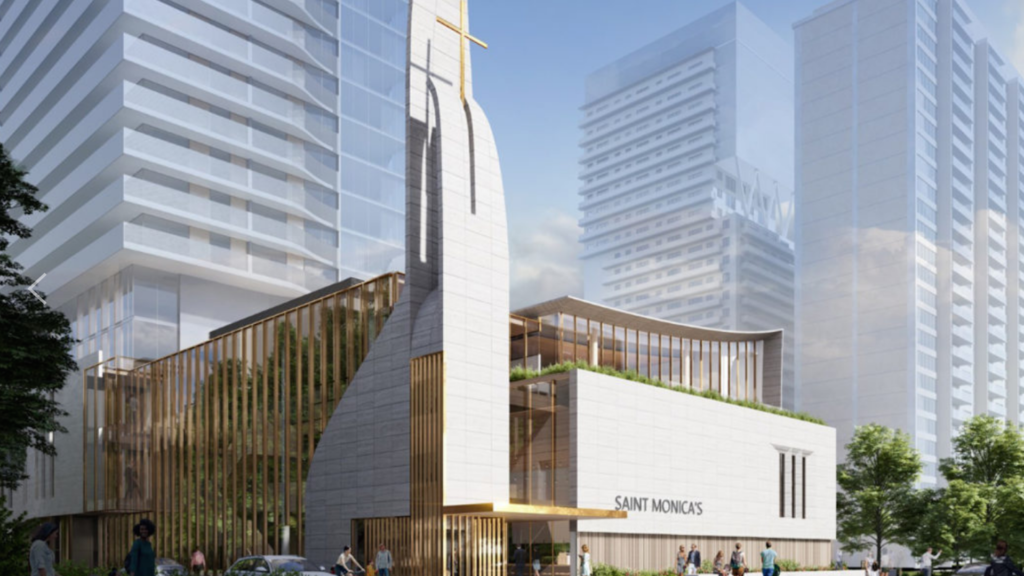 With prime real estate becoming scarcer and scarcer in Toronto, churches are presenting new opportunities for developments to be built.

That is the case for Saint Monica’s Church at 44 Broadway Ave., which has worked with developer Collecdev to offer its land in exchange for a new church. The new application for the development has just been submitted to the city of Toronto where it will be circulated and brought to Toronto and East York Community Council for approval.

Beginning around six years ago, members of the church recognized it was in need of serious repairs and there might be a development opportunity that could be financially profitable, according to James Milway, chancellor of temporal affairs with the Archdiocese of Toronto. The idea was to sell the acre lot, tear down the church and build a new one where there was a surface parking lot.

“When the dust settled, financially, the Archdiocese would be ahead,” said Milway, noting the extra funds could go to their other churches around the city also in need of repairs.

A search for the right developer then went ahead and out of 12 competitors, Collecdev was chosen because of its reputation for working closely with communities.

Miria Ioannou, a representative of The Republic Residents’ Association, said that so far the developer has involved residents by, for instance, inviting them to a settlement hearing — a move that was well appreciated.

The hearing resulted in a number of changes to the proposal, such as lowering the height from 44 storeys to 39, the number of units from 398 to 376, and the creation of a dog relief space and a new public parkette in front of the church.

“The church is a beautiful design,” Ioannou said. “It’s going to be an attractive addition to the neighbourhood.”

Designed by KPMB Architects, the new church will be clad in stone and gold-framed glass. It will sit at four storeys with a 25-metre steeple, and be more accessible than its current form with the inclusion of an elevator.

The idea of a church pairing with a developer is not a new one, but it is picking up steam in Toronto as prime land for development becomes harder to find. Bloor Street United Church just west of Spadina is another example of the concept, where a tower, also designed by KPMB, will be built behind the church.

Milway said the Archdiocese has a number of other properties around the city that will also need attention. However, they may not be as good of candidates for development as Saint Monica, where “the stars all aligned” partly due to its location which allows for high towers. One obstacle is the heritage elements of other churches, which could make developments near them trickier, according to Milway.

“We’re always looking for opportunity, but they’re few and far between,” he said.