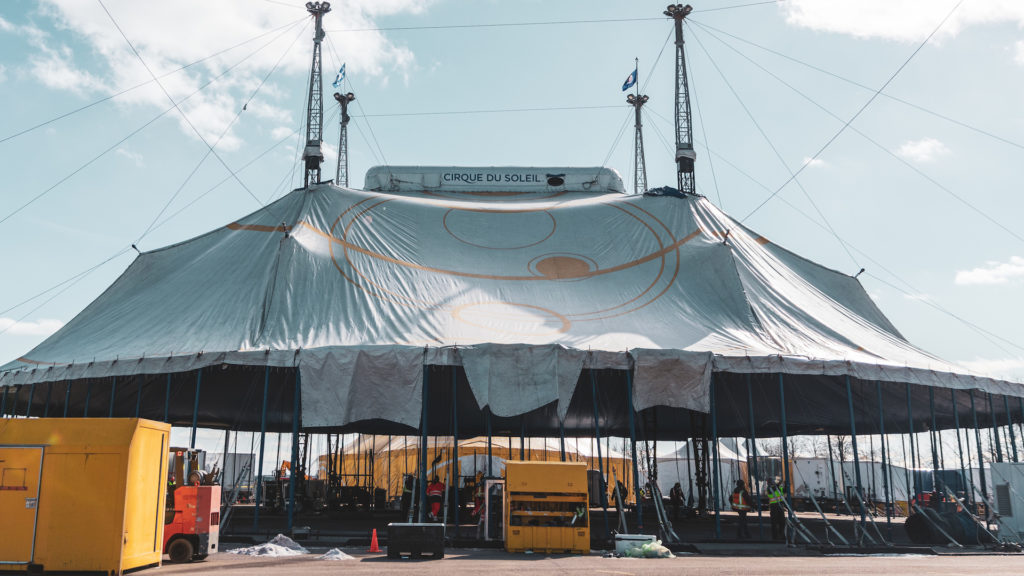 The Toronto waterfront has a new big top tent on the shores of Lake Ontario in advance of the opening of a new Cirque du Soleil show set to run from April 14 until at least July 17.

The raising of the 65-foot-tall big top tent took place over six days finishing on March 4 in preparation for the show at Ontario Place and taking a team of almost 100 people.

“Our iconic Big Top taking its place in the Toronto skyline is a special moment,” says Mike Newquist, of Cirque du Soleil. “It’s the first to be raised in Canada since the relaunch of our shows and we’re excited to say ‘take your seats.’”

KURIOS – Cabinet of Curiosities, the company’s 35th production, is the first Cirque du Soleil show to launch since the pandemic hit back in 2020. Response to the show has been positive and the show has already been extended beyond its original engagement.

Cirque du Soleil describes KURIOS as taking place in “an alternate yet familiar past, KURIOS steps inside the mechanical lab of an inventor convinced that there exists a hidden, invisible world – a place where the craziest ideas and the grandest dreams await. Once the inventor succeeds to unlock the door to this world of wonders, time comes to a complete stop and an uplifted cast of otherworldly characters invades his curio cabinet, bringing his makeshift creations to life one by one. As the visible becomes invisible and perspectives transform, KURIOS bursts into a celebration of the power of the imagination.”

KURIOS is unique in the Cirque du Soleil canon of shows in presenting a welcoming act on top of the big top before the show starts. According to show information, when weather permits, three artists climb up the big top and greet the guests from above while playing music and acting.

Cirque du Soleil began in 1984 as a group of 20 street performers in Montreal and has been a regular and beloved visitor to Toronto for years, setting up the big top with intimate theatre setting in a variety of locations including most recently the port lands.

Check out cirquedusoleil.com/kurios for show information.