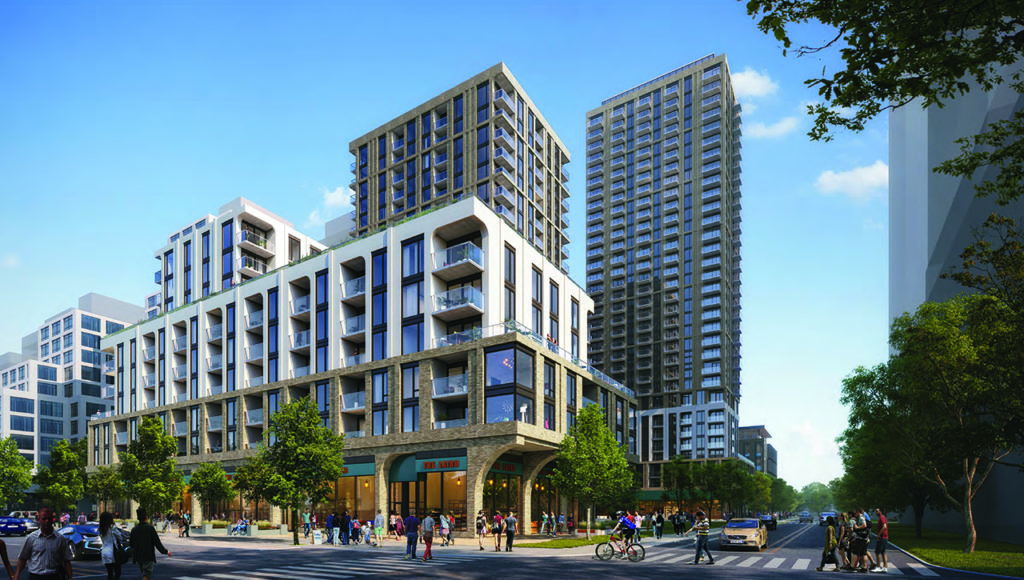 Where a luxury-car dealership currently stands in Leaside, two new residential towers and office space could be sprouting — that is, if a recent development application gets the green light from the city.

The 1.42-hectare parcel of land between Laird Drive and Brentcliffe Road is the long-time home of local auto dealers Mercedes Benz Midtown.

A planning rationale submitted by planning consultants Bousfields Inc. on behalf of the landowner argues that the site is “underutilized” as-is. Its proximity to the future Eglinton Crosstown LRT’s Laird Station, roughly 200 metres away, makes the land a candidate for intensification under the provincial growth plan, the document notes.

Vaughan-based Pemberton Group is reported to be behind the Leaside development, although the developer did not respond to requests for comment as of publication.

If completed, the project would bring 747 new residential units to the area, including 26 studios, 419 one-bedroom units, 226 two-bedroom units and 76 three-bedroom units. The application does not specify whether the units would be rental apartments or condos.

The development’s shorter tower would front Eglinton, with retail space lining its ground floor, while the taller skyscraper would soar between it and the offices proposed for the site’s south end, at Vanderhoof Avenue.

Under the layout envisioned in the application, new public roads flank either side of the property, connecting Eglinton with Vanderhoof, and a private street runs east-west.

Also in the plans is a 650-square-metre public park, which would be accessible via the western public road.

Although new development has brought some more green space to Midtown in recent years, the community continues to face a serious parkland shortfall. There’s an estimated 5.8 square metres of parkland per Midtown resident, versus the city-wide average of 27.9 square metres per person, according to the city.

As per the planning rationale, the developer is open to designing and building the park for the municipality — in exchange for credits on development charges, which have been a sore spot for the building industry lately amid a proposed municipal hike.