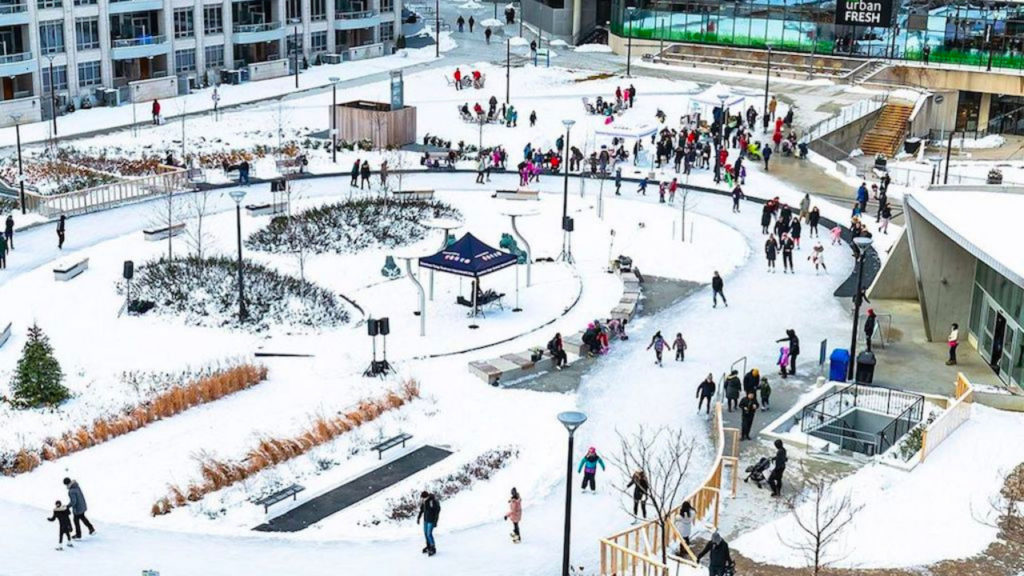 It’s the most wonderful time of the year – skating season, that is! The city of Toronto has officially opened city’s outdoor skating rinks, and we’re getting excited.

Winter can be a polarizing season. There are those who truly seem to embrace the cold, while others hunker down awaiting the moment they can trade snow boots for sneakers. But no matter which side of the seasonal fence you’re on, one of the best ways to embrace winter is to find an outdoor activity you enjoy. While skiing is a fun option, it can also be pricey, especially for a family. But ice skating is a budget-friendly option (often free if you have your own skates) that makes it easy to get active outdoors in the cold.

The majority of city-run rinks opened on Nov. 26 and will remain open until March 19 next year, weather permitting, with a select few rinks opening on Dec. 3 instead (check the city of Toronto website to check if your neighbourhood rink has a later opening date). If you’re looking for a place to skate this winter, here are some of the best rinks to check out.


Skaters at this east end rink have not one, but two spots to glide across the ice. Choose from the city’s first covered outdoor artificial ice rink where the roof keeps rain and snow of the skating surface. The rink offers pleasure skating as well as shinny programs for both kids and adults. Beside the rink, ice skaters can also enjoy a 215-metre pleasure skating trail.


One of the newer rinks in the city happens to be located at the Sir John A. Macdonald Plaza in front of Toronto’s busiest transit hub. This season, Union Station will once again be home to a free outdoor ice skating rink starting Nov. 28 as part of its annual “Union Holiday” celebrations. The sprawling skating spot on Front Street will be the largest free outdoor rink in Toronto and in addition to the rink being free to use, skate and helmet rentals are also free. You might want to register online for timed entry in advance to secure a spot! There will also be DJ skate nights on Fridays and Saturdays along with weekly free skating lessons on Tuesdays for those who are a little newer to the skating game.


Opened in 2019 in College Park and named after the Canadian figure skater Barbara Ann Scott who won gold at the 1948 Olympics (among many other accolades), the Barbara Ann Scott Ice Trail features a five-metre-wide trail that loops through the downtown park (it’s also used as a walking trail in the warmer months). It’s also purportedly the first outdoor skating path in North America to use an eco-conscious technology in its refrigeration system that does not produce any net greenhouse gas emissions.

This year, Downtown Yonge BIA is hosting an opening party at the rink this month on Nov. 26, featuring a host, live DJ, on-ice dance performances, games and a lighting ceremony at sunset. We can guess the weather


Ice skating with a waterfront view? Say no more! The Paul Quarrington outdoor ice rink at Sherbourne Common is artificially controlled, meaning you don’t need to worry about unseasonably warm weather ruining your skating date. Enjoy views of both the city skyline and the water all season long.


If your idea of skating involves being close to nature rather than in the middle of the city, you might want to check out this rink, running along a stretch of wooded shoreline in the Kipling and Lakeshore area. The expansive, 250-metre rink in Etobicoke designed in a figure-eight shape was actually Toronto’s first-ever skating trail and continues to offer a quieter place to enjoy a skate.


Found just outside North York Civic Centre just steps from North York Centre subway station, the skating rink at Mel Lastman Square is a favourite among families. The rink here doesn’t tend to get quite as busy as those found closer to downtown, and it offers a scenic place to skate. The 20,000 square foot park also offers an abundance of outdoor space for wintery walks and close proximity to amenities like coffee shops.


The skating trail at Evergreen Brick Works is probably one of the prettiest places to skate outdoors in the city. The rink here weaves through snow-covered gardens (complete with twinkly lights come dusk) and under exposed beams from the roof of the old brick factory. There are usually lots of special events in the leadup to the holidays here and skate rentals and skate sharpening are available. The rink is usually open from December to March, weather permitting.