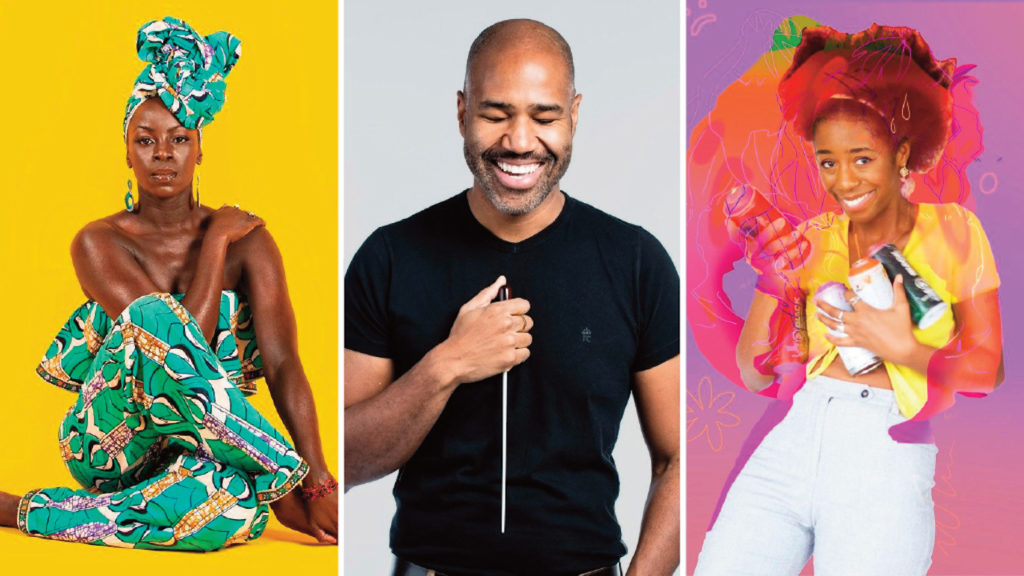 We’re lucky to live in a city that, even through the hardships of the past two years, has produced some of the greatest talent and inspiring art out there. From music to visual art to acting, Toronto has been the birthplace of all kinds of wonderful artists. This month, we’re highlighting a few of the amazing Black artists in the city.

Making a living and achieving success as an artist is no easy task, but the job is even more challenging for Black artists in Canada. A 2020 study from Hill Strategies found that racialized artists in Canada make a median income of $18,200 a year, compared to $25,400 for non-racialized artists, a difference of 72 cents for every $1. Many Black artists have called out the institutionalized anti-Black racism within Canada’s art institutions, pointing to toxic workplaces and the lack of support for Black employees and artists in organizations across the country.

We’re highlighting six Black artists in Toronto who are making changes within their own industries, from a barrier-breaking conductor to a muralist adding colour across the city.

Daniel Bartholomew-Poyser has been making headlines as the first openly gay Black conductor in Canada, and in 2021, he was chosen to host CBC Radio’s classical music program, Centre Stage. That’s on top of being appointed the resident conductor of engagement and education by the San Francisco Symphony, being the current artist in residence and community ambassador at Symphony Nova Scotia and the principal education conductor and community ambassador of the Toronto Symphony Orchestra. Follow him here.

Artist Curtia Wright has been turning heads with her breathtaking mural work across Toronto, and her most recent murals this year have brought joy to neighbourhoods all over the city. She took part in the Baldwin Street mural in Kensington Market, celebrating Black women artists and Black non-binary artists. Her Oakwood Village mural celebrated Black queer lives during Pride Month, and she was the visionary behind the beautiful Love Park interactive audio-visual installation along the waterfront. Wright’s talent and contributions to public art in the city have been a bright spot through the darker moments of the pandemic. You can see more of Wright’s artwork at the Riverdale Hub, where a few of her art pieces are currently on display. Follow her here.

Toronto-based rapper DijahSB received the Kid Cudi stamp of approval last year for their CBC performance. They’ve been making their mark in the music industry for over 10 years now, but it was their second album, Head Above Water, that put them on the map as a rapper that stands out above the crowd. Exploring dark topics with an openness that pairs well with the versatility of their music, DijahSB will likely gain even more of a following with their recent song, Green Line (a tribute to the TTC’s line two). Follow them here.

Dancer and choreographer Esie Mensah has left her creative mark on almost every industry out there, dancing on the sets of Rihanna and Drake music videos, choreographing and directing her own productions that she’s taken international and even speaking at TEDxToronto. Mensah’s recent short film TESSEL, which premiered in 2021 in collaboration with Harbourfront Centre and Fall For Dance North, broke barriers featuring 14 Black performers from across Canada. Follow her here.

Toronto portrait-based photographer Jorian Charlton’s AGO exhibit Out Of Many received high praise in 2021, but it was the 70 ft. high photograph that was unveiled in the heart of the Financial District in November as part of a public art initiative that really turned heads and solidified her position as an up-and-coming artist in the city. Her exhibition at the AGO will be on display until Aug. 7, 2022. Follow her here.

Actor Stephan James has earned international recognition for his roles in If Beale Street Could Talk, Selma, Race, National Champions and more in the short time he’s been in the film industry so far. He has also made real changes in the industry with his work with brother and co-founder Shamier Anderson. The pair founded The Black Academy and Insight Productions, an organization with the goal of highlighting and celebrating emerging Black talent in Canada. James and Anderson recently partnered with CBC through The Black Academy to bring the first award show honouring Black talent to Canada, currently planned for fall of 2022. The pair also partnered with brother Sheldon James to raise Canada’s largest venture fund for Black, Indigenous and other racialized founders. Follow him here.