56 storeys next to Minto Midtown towers? - Streets Of Toronto
Skip to content 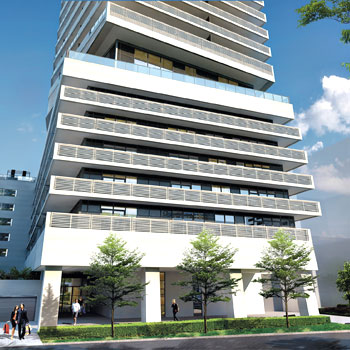 Tower Hill Development has submitted an application for a 56-storey, mixed-use development at 2221 Yonge St., the northern neighbour of the 37- and 54-storey Minto Midtown condominiums.

Yonge Street and Eglinton Avenue is no stranger to condo controversy, and this application is no exception. When the preliminary report for the application appeared before Toronto and East York Community Council on May 14, City of Toronto staff reported that they found the proposal inappropriate for the site.

According to Coun. Josh Matlow, it’s not simply the height of the proposal that is off-putting. The close proximity to the northern Minto tower makes it inappropriate. “The site is too tight to build something that high,” said Matlow.

But for all the dissent against the development, South Eglinton Ratepayers’ and Residents’ Association member Jane Auster, who has previously spoken out against tall tower development further south, doesn’t see what the fuss is all about. “As far as I know, no one close by is opposed to it because it’s nestled right next to Minto,” she said.

Tim Burkholder, the city planner assigned to the application, echoed Matlow’s concerns and said that the setback of the proposal’s south wall is already too small, and its irregular, convex shape brings the wall less than two-thirds of the minimum width from the border. “Its setbacks to the [south] property line, which is adjacent to the north Minto tower, range from eight to 10.4 metres — less than the 12.5 metre setback that would be recommended.”

Matlow said he hasn’t gotten a chance to gauge public opinion on the proposal because public awareness is still low. The first public meeting is scheduled for June 5 at 7 p.m. at North Toronto Collegiate Institute, and Matlow is hoping for attendance from a broad spectrum of neighbours.

“I moved a motion at council to extend the notice area so that as many people in the Yonge-Eglinton area as possible will be invited.”