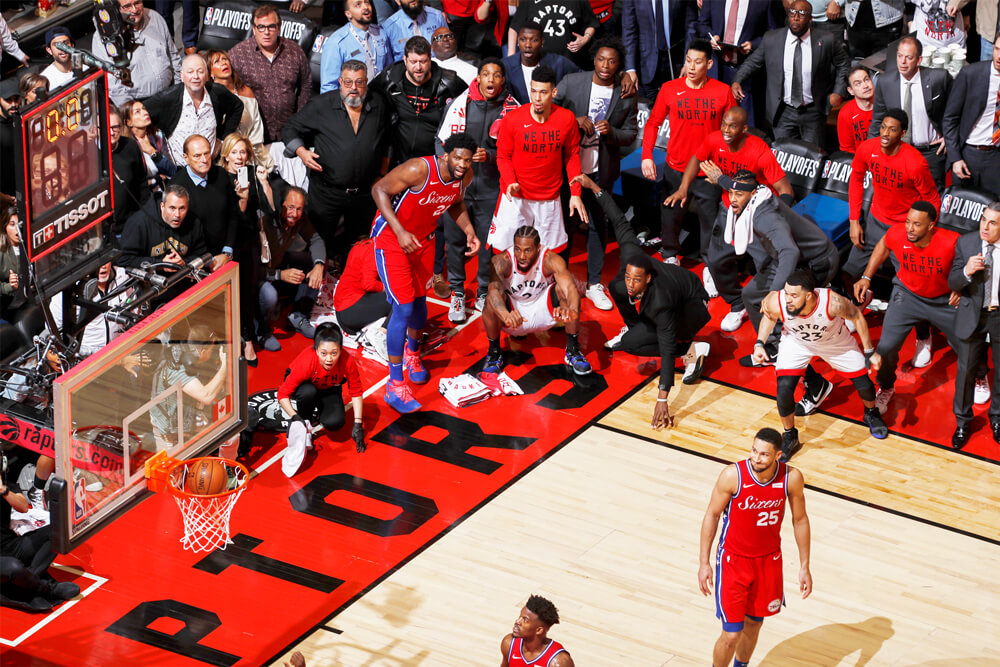 In honour of the Toronto Raptors heading to the playoffs today, we’re rounding up the 5 biggest moments in the franchise’s history!

In 2001, the Raptor’s faced off against the 76ers and history was made in Game 3. Scoring 50 points, Carter led the Raps to a big win, breaking the franchise’s record for the most points scored by a single player in a postseason game.

To this day, Carter is the only Raptor to ever score 50 points in a postseason game.

#4: Jurassic Park during the 2019 Championship Game

June 13th, 2019 is a night that won’t be soon forgotten by the Raptors’ fans—especially those who celebrated the big win in Jurassic Park.

When the Raptors defeated the Golden State Warriors in Game 6, clinching their first NBA Championship, Jurassic Park was alive with excitement and celebration! Among the crowd was mister Champagne Papi himself: Drake.

Perhaps a continuation from #4, but who could forget Plant Guy?!

After the championship win, a reporter covering the aftermath and celebrations on the streets of Toronto captured the loveable Plant Guy, a man who uprooted a plant with the hopes of gifting it to Kawhi Leonard as a housewarming gift. Though his efforts to get Kawhi to stay were defeated, he was victorious in eventually getting a plant to Kawhi during the parade!

Why did Kawhi deserve a housewarming gift, you might ask? Well, there are many reasons. However one moment, in particular, will forever be engrained in Raptor’s history—and that was his legendary buzzer-beater.

Game 7. Eastern Conference Semi-Finals. This shot immediately became one of the most iconic moments in all of Canadian sports history.


Downtown Toronto was a sea of Raptors fans as hundreds of thousands of people gathered in the streets to cheer on and congratulate the team.

The parade started at the Princes’ Gates and made its way to Nathan Phillips Square, where the team took to the stage to not only be thanked by the city—but to give their thanks to the city and the country! The team, led by Raptors’ GOAT Kyle Lowry, was awarded the key to the city as the crowd erupted in cheer.