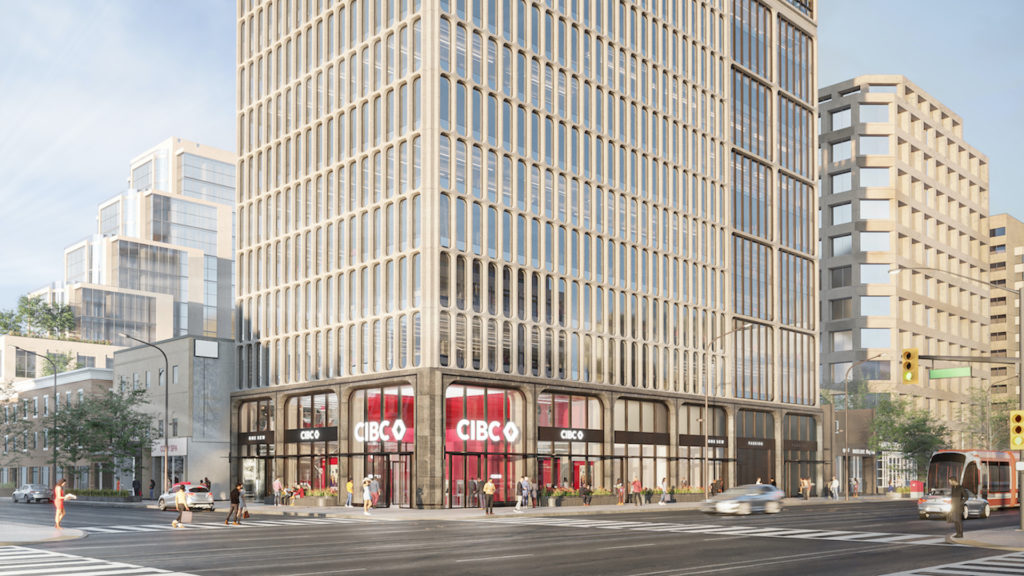 A developer has revealed its plans for a 49-storey mixed-use tower in the final corner of Yonge and St. Clair that it controls.

Slate Asset Management owns assets at all four corners of the intersection, acquisitions it began in 2013 with the purchase of five office buildings.

The company said it is transforming the area into “one of Toronto’s premier live-work neighbourhoods” and helped establish a business improvement area (BIA) association for Yonge and St. Clair.

“1 St Clair W, at the southwest corner of the intersection, is the last of the four corners.”

The other three corners now hold a TD Bank, an RBC and BUCA restaurant, and a Scotiabank, with the final corner planned to host the CIBC currently there.

The location is notable for a work of street artist Phlegm commissioned by Slate back in 2013.

The planned tower for the southwest corner would be the tallest in the area and hold 340 residential units that range from one to three bedrooms, as well as contain three storeys of indoor and outdoor amenities.

The base of the tower would make use of an existing 12-storey Modernist building that dates back to 1968 and will be preserved. However, the adjacent 11 and 13 St. Clair Ave. W. would be demolished to make way for an expansion.

Torontonians may recognize the 12-storey building as the canvas of a massive mural done by artist Phlegm in 2016. The mural shows a humanoid shape curled up in the fetal position.

Local resident and president of the Deer Park Residents Group, Cathie Macdonald, said that the plan for 1 St. Clair West is in addition to five other developments in the works for the area, two of them featuring 44-storey towers.

“It’s an enormous change for the area,” she said. “It’s going to be like a high-rise neighbourhood.”

Macdonald has lived in the area for 25 years and remembers when there were local amenities such as movie theatres along Yonge Street. She hopes that such amenities will return to the neighbourhood, but for now, is bracing for the impacts of construction from the numerous developments on traffic and pedestrians.