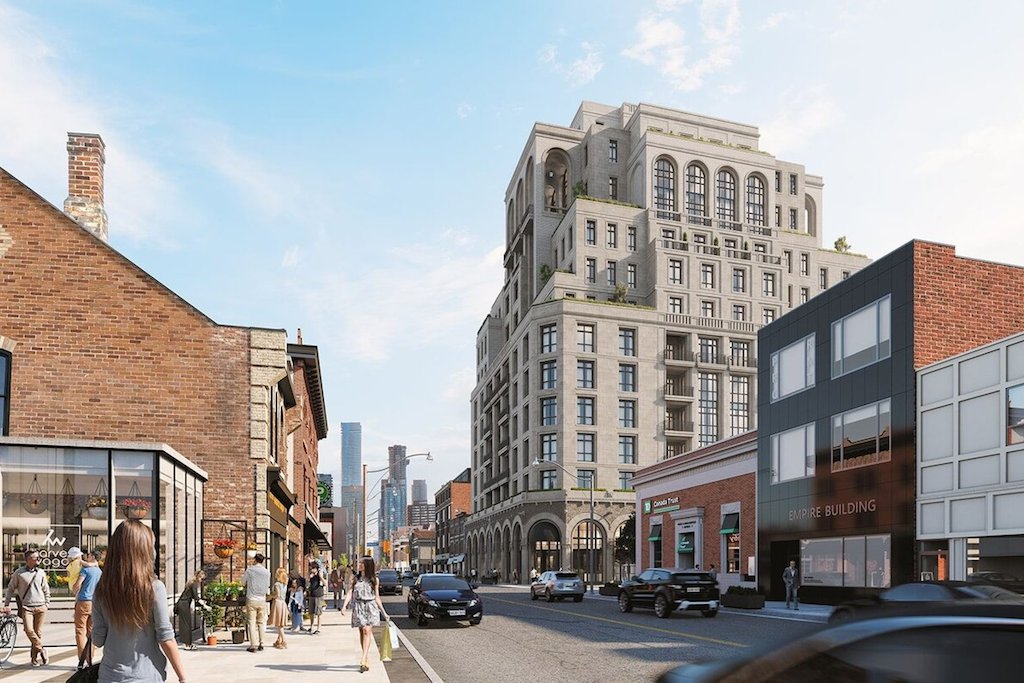 An application for a new 13-storey condo development has recently been submitted to the city on a historic site in Rosedale, but some are concerned its height might be too much.

The proposal for 1140 Yonge St. at Marlborough Avenue, between Summerhill and Rosedale subway stations, will take the place of a Staples Business Depot outlet.

Acquired by Devron Developments in late 2018, the property dates back to 1930 when it was used as a showroom for luxury Pierce-Arrow cars. Since then, the building has been used as a record and phonograph repair shop and as a studio space for the Canadian Broadcasting Corporation from 1954 to 1991.

The proposed condo will consist of 66 units, split between 11 one-bedrooms, 43 two-bedrooms and 12 three-bedrooms. There will also be three townhouses on the ground floor and over 1,300 square meters of retail space, including a possible restaurant.

However, residents and local councillor Mike Layton have expressed concern that the 13-storeys proposed is too tall for the location.

The building stands higher than most other buildings in the neighbourhood, apart from one other proposed development, the James at Scrivener Square, which will be 20 storeys.

Layton’s main concern has to do with “transitions,” meaning how the height of the building compares to the lower mid-rises surrounding it. When it comes to 1140 Yonge, Layton said the developers have asked for too much height and density, to the point that it doesn’t allow smooth transitions, which goes against city planning guidelines.

“The developer has asked for more than we recently have identified as being maximum for the site,” he said. The downtown official secondary plan identified this site as being appropriate for a mid-rise, according to Layton.

Layton noted that the height would tower over nearby properties, creating a “dramatic change to the character of the properties.” Gradual transitions are meant to limit the impact on surrounding properties, so one doesn’t “dominate” over the other, Layton said.

He hopes that the height will be lowered by the developer to allow better transitions, but said the city is “prepared to fail” in that battle.

Ian Carmichael, the co-president of ABC Residents Association, is also not happy with the height.

“We think this building is about twice as tall as it should be,” he said. “It sets a dangerous precedent for the neighbourhood.”

Carmichael said developers usually just point to what has already been approved as justification for their own plans.

“Once you shove a giant building into a small site, all of the problems are magnified,” he said, listing shadows, overlook, traffic and parking as potential issues. “All of those things start to spill out and have a negative effect on the neighbourhood.”

He predicts that unless changes are made, city council will reject the proposal. Already city staff have identified the lack of “appropriate transitions” in their preliminary report.

However, Carmichael said the developer has not been receptive to concerns. Instead, he said the process has been similar to the film Groundhog Day, where the developer returns after a month with the “exact same drawings.”

“He’s been very slow to adjust his plans to our concerns,” he said. “There’s been some movement, but it’s been incremental.”

Carmichael noted that while the building is technically 13-storeys because it is a luxury condo and the units are taller, it stands at a total height of 57 meters, which is comparable to other 18-20 storey buildings.

Devron president Pouyan Safapour said he understands the residents’ and Layton’s concerns. He said they have spent the last year and a half having conversations with involved parties and will continue to speak with them to find an “intersection” amid the different viewpoints.

He added that possible solutions could include altering the design to make it look less tall, such as with stepping in terracing, but admitted he doesn’t have a “concrete answer” yet as they are about halfway through the process.

“We want to create a building that people want in the neighbourhood,” he said.

A public consultation is scheduled to take place virtually on Nov. 17 for residents to voice any concerns.