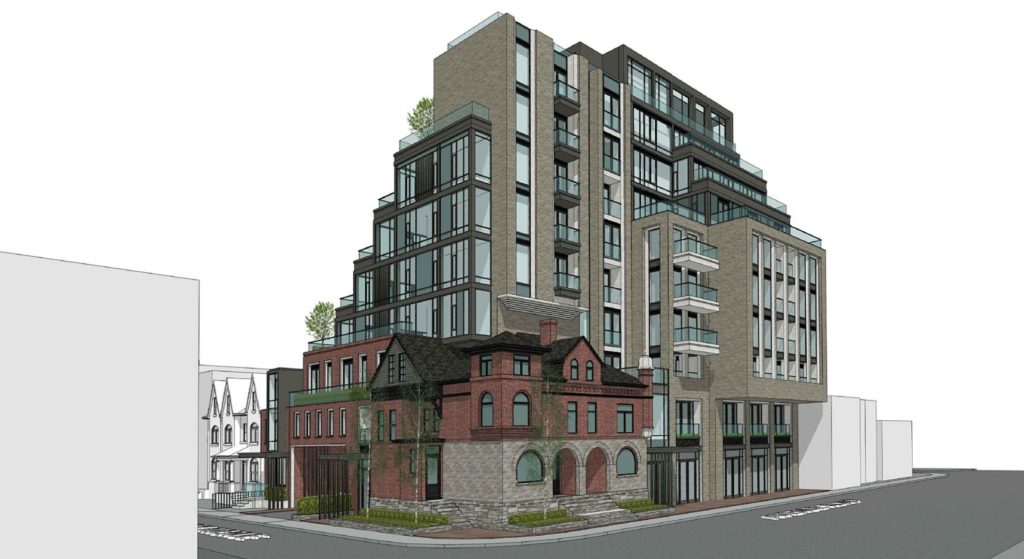 Nearly a decade after a fire destroyed the former location of the Annex’s Soto Soto restaurant, plans are moving forward for a new development at the site.

Toronto and East York Community Council voted in late June to allow the rezoning of 110-116 Avenue Rd., opening the way for a new nine-storey mixed-use development.

The new building from developer Sierra Communities would include 45 units, 350 square metres of retail space and an underground parking garage with 52 vehicle spaces and 46 bicycle spaces.

A fire of unknown origin in 2014 destroyed 116 Avenue Rd., where Soto Soto was located. While the fire has spurred a new development, residents have voiced concern since its proposal over how traffic will integrate into the two smaller adjacent streets of Tranby and Bernard Avenues.

Local councillor Mike Layton said city staff have worked very hard to mitigate impacts the new development would have on traffic in the Annex. Although those issues are still to be worked out, he is now in support of the application.

Possible solutions include widening Tranby Avenue and making it a two-way street as opposed to a one-way going east as it currently is, and also possibly making a “laneway corridor” between the streets for easier movement. Another development is planned just north of the site at Bernard Avenue and Avenue Road, adding to possible congestion.

“By creating a laneway network around those [developments], it creates a bit of a buffer between the neighbourhood, as well as a better access point,” Layton said.

While many residents wanted the access point to the new development off of Avenue Road, city staff were not supportive of that, according to Layton. Instead, they have opted for a side street vehicle entrance because of hopes of making Avenue Road more pedestrian-friendly and potentially widening the street.

“We don’t want [Avenue Road to be] one driveway after another,” Layton said.

Heritage aspects of 110-112 Avenue Rd. will also be preserved, as the buildings date back to the early days of the Annex. Unfortunately, 114 Avenue Rd. had to be demolished due to neglect, according to Henry Wiercinski, a vice-char of the Annex Residents’ Association.

Nevertheless, he said the fact the other buildings have survived over the years is a “minor miracle,” and is happy to see them preserved.

“We’re quite attached to them,” he said.