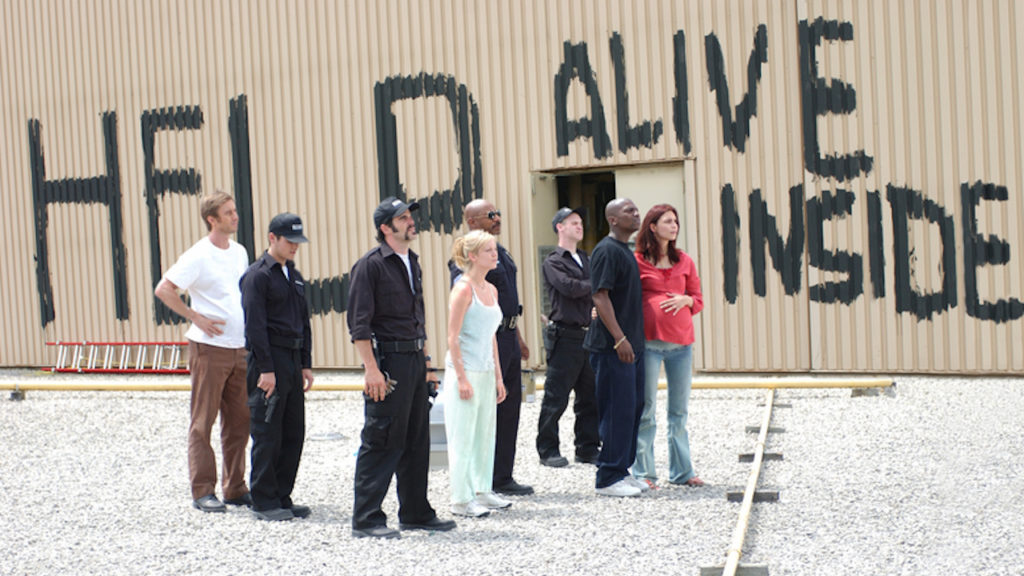 Forget haunted houses or graveyard tours—this Halloween, check out these eerie Toronto locations that were featured in some spooky horror flicks (or better yet—watch the movies themselves). Although these flicks weren’t set in the GTA, Toronto was used as the backdrop to make the scenes seriously frightening. Here are 10 (of the scariest) horror movies/scenes filmed in Toronto.


The 122-year-old abandoned Cranfield House in downtown Toronto at the northwest corner of Pape and Riverdale (450 Pape Avenue) was home to Pennywise the Clown in Stephen King’s horror adaptation of It. As the abandoned house is protected under the Ontario Heritage Act, it makes it difficult for developers to remodel it, still, it’s been used in multiple productions. The indoor library scenes for It were filmed at the University of Toronto’s Wycliffe College (5 Hoskin Ave, Toronto). The downstairs library archive scenes were filmed at Toronto’s Masonic Temple at 151 Annette Street. The bar mitzvah scene was shot at Congregation Knesseth Israel (an Orthodox Jewish congregation at 56 Maria St, Toronto).


The 2013 remake of the 1976 classic teen horror flick was shot in and around Toronto. The exterior of Carrie’s house—a one-and-a-half-story home with a peaked rooftop and four-paned windows—is a real family home located on Niar Avenue in suburban Mississauga (the home has reportedly since been renovated and doesn’t resemble its portrayal in the film).  The exterior of Carrie’s school was shot at Northern Secondary School at 851 Mt Pleasant Road in Toronto. The scene where Ms. Desjardin chastises a few of her students was shot at the Northern Secondary School’s athletic field (behind the school). The tailor shop where Margaret White worked is located at 773 Annette Street in Toronto. An extended scene of Carrie’s iconic confrontation with two of her classmates by the gas station was filmed at 215 Islington Avenue in Etobicoke.


The 2000 slasher flick was set in New York but primarily filmed in Toronto. Bateman’s office (Pierce & Pierce) was filmed at the Toronto-Dominion Bank Tower, 66 Wellington Street West. The dry-cleaning store where Bateman visits to get ‘juice stains’ removed from his sheets is Valet Cleaners at 38 Church Street, Toronto. The restaurant where Bateman escorts his date to is located at 100 Simcoe Street (at the corner of Adelaide Street West), the space is now a family-run steakhouse restaurant called Michael’s on Simcoe. The scene featuring a shoot-out with the police was filmed on Pearl Street (between Simcoe and Duncan).  The bar featured in the final scene is Biff’s Bistro, at 4 Front Street East.


The Silent Hill movies are adaptations of the Silent Hill video game series. While the downtown scenes were filmed in Brantford, Ontario, the road to Silent Hill (used for the police checkpoints) was filmed at Toronto’s Sewells Road Bridge (1119 Sewells Road, Toronto). In the 2012 sequel, scenes at the Brookhaven Asylum (the mental hospital used as a curing ground by the Order) were filmed downtown at Central Tech High School, 725 Bathurst St, Toronto. The Lakeside Amusement Park scenes were filmed at Cherry Beach (at the foot of Cherry Street just south of Unwin Avenue in Toronto). The shopping mall scenes were filmed at Woodbine Centre, Etobicoke. Other Toronto filming locations for the sequel included Valley Halla Estate, Rouge Park, Toronto, and the Richard L. Hearn Generating Station at 440 Unwin Avenue, Port Lands, Toronto.


The original Saw horror flick was filmed in LA, but the sequels, Saw II–Saw VII (2005–2010), Jigsaw (2017), and Spiral (2021), were largely filmed in Toronto. As most scenes were shot in dingy interiors, very little of Toronto could be seen in the films. Still, in Saw II, a police raid at the Wilson Steel building was filmed at the Hearn Generating Station at 440 Unwin Ave. In Spiral, the city morgue at 86 Lombard Street was filmed as the police station exterior.


This classic zombie apocalypse flick had multiple scenes shot in and around the GTA. The shopping mall where the survivors take refuge was shot at Thornhill Square Mall in Markham; the establishing shot of the mall was filmed on Royal Orchard Blvd (under the Bayview bridge).  The marina where the zombies chase the survivors to was filmed at Ashbridge’s Bay (1561 Lake Shore Blvd E, Toronto).


This survival horror flick is based on a video game series that inspired six Resident Evil movies. In the first sequel, Apocalypse, the main character finds herself in the fictional Raccoon City—the climax of which was filmed on the Podium Green Roof at Toronto City Hall (100 Queen Street West). Other parts of the flick were filmed at Northern Secondary School (851 Mt Pleasant Road, Toronto) and Westwood Theatre (3743 Bloor Street West, at the intersection of Bloor, Dundas West, and Kipling Avenue). Scenes from the remaining sequels were also filmed in Toronto.


This is the fourth zombie apocalypse flick by legendary director George A. Romero.  The movie takes place in Pittsburgh, but many of the scenes were filmed in and around the GTA. Toronto’s Cherry Street Strauss Trunnion Bascule Bridge is used in the scene where they try to lower the bridge to safety.  The shopping mall at the base of the tower was actually downtown Toronto’s Brookfield Place (181 Bay St.).


This teen slasher flick took was set in a picturesque New England university but was filmed at a few Toronto university campuses, including Humber College (3199 Lake Shore Blvd). The radio station scene where Sasha is attacked was filmed at the Rotman School of Management, University of Toronto (105 St George St.). The pool scenes (where the main character swims laps) were shot at Etobicoke Olympium (590 Rathburn Rd.).


The 1980 cult classic slasher flick staring Jamie Lee Curtis was shot almost entirely in Toronto. The opening scenes were shot at Langstaff Jail Farm, Richmond Hill (corner of Yonge Street and Langstaff Road). Most of the interior and exterior ‘Hamilton High School’ scenes were shot at Don Mills Collegiate Institute (15 The Donway E, North York), and a few of the exterior shots (including one chilling scene involving a runaway van) were filmed at Scarborough Bluffs (1 Brimley Rd. S, Bluffers Park, Scarborough). The cemetery where the family visits Robin’s grave is located at St. James Cemetery (635 Parliament Street in Toronto).

Click here for the 7 best candy shops in Toronto for Halloween-worthy treats.