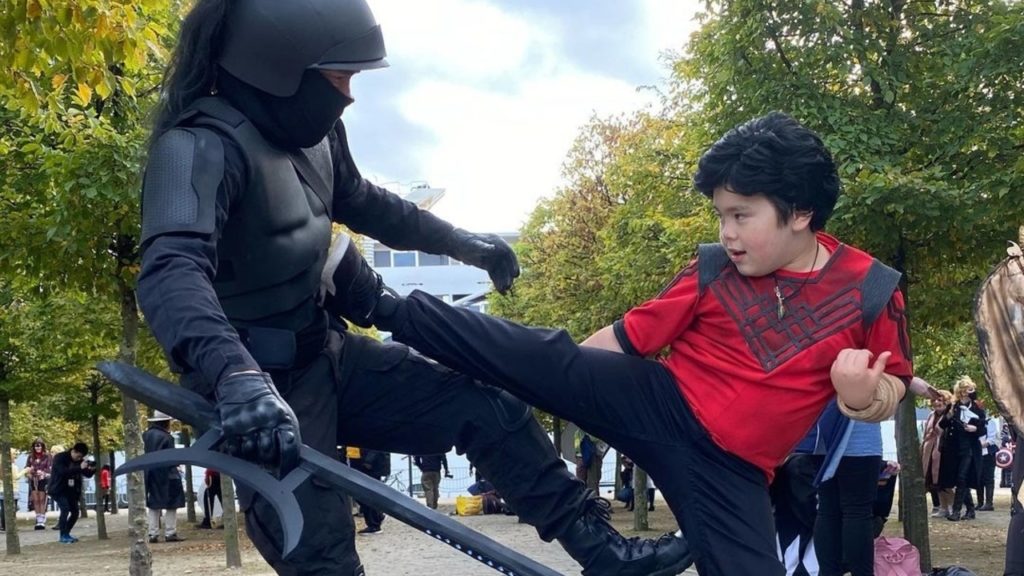 Halloween is right wound the corner and the top costume ideas are inspired by the shows and movies we’ve been binging on throughout the pandemic. Forget the classic schoolgirl outfit, and instead don your multi-coloured pigtails with a jester-inspired bodysuit and heavy boots à la Harley Quinn in Suicide Squad 2. Or play debutante for the evening in a powder-blue empire waste gown like Daphne Bridgerton (alas, Simon Basset is not included).

Whatever your tastes—keep scrolling to see the best Halloween costume ideas for 2021 (bonus: most of these items can be found on Amazon (links included) or in your local costume shop).

Cruella was one of the OG Disney villains, and this year’s live action flick starring Emma Stone is inspiring many to embrace their fashionably clad dark sides this Halloween. Opt for a floor skimming red dress, elbow-length opera gloves, a masquerade mask and a black and white Cruella wig.

Toronto’s one-and-only is the perfect choice for Halloween 2021. There are so many memes to play off of, but the current choice might be the pregnant woman emoji from the Certified Lover Boy album release. All you need is a belly bump, coloured shirt and a hair bob.

Netflix’s most-viewed original series in history is full of all kinds of costume ideas, and some of them are perfect for anyone looking for a last-minute, low-maintenance costume. From a player costume (grab a green tracksuit and stick a player number of your choice to it) to the VIPS (dress in your fanciest attire and slap on a glittery animal mask, available at local costume shops), you’re sure to spot a few of these costumes at any Halloween party you go to this weekend!

Harley Quinn’s Suicide Squad costume sparked a frenzy of similar bat-yielding replicas for Halloween in 2016, and this year will likely be the same. Luckily, Margo Robbie’s character sports two major costumes in Suicide Squad 2. Opt for a tattered red dress and combat boots or a jester inspired red and black bodysuit paired with a chest-length faux leather jacket. Don’t forget the pigtails and temporary tattoos.

Loki is a great costume idea for couples (or even for the whole family); everyone could go as their favourite Loki variant from the recent Disney Plus hit series. To dress as Sylvie, opt for a black and green cape, a turtleneck long-sleeve shirt, riding boots, fingerless gloves and a horn mask.

Probably the easiest costume this year because most of us have been doing it for so long. Think tie-dyed sweater, sweatpants, non-brushed hair and too many coffee mugs.

Millennials freaked out over the Rugrats reboot this year. And yes, it may have been CGI-animated instead of the retro-2D, and no, Susie couldn’t talk in this updated version, but what matters is the reboot will give kids adults a chance to channel their inner childhoods this Halloween.

Daphne Bridgerton is the heroine of Netflix’s steamy Bridgerton series, and the inspo for the most perfectly sweet and sultry Halloween costume. Don your hair in a loose curly updo and face-framing baby bangs. Pair with mid-length sheer gloves and an uber low-cut empire waste gown (and don’t forget the corset). Bonus: get your significant other to dress as Simon Basset and you’ll have the most regally romantic evening.

Shang-Chi (“Shang-Chi and the Legend of the Ten Rings”)

“Shang-Chi” was a box office hit in the middle of the pandemic, and his iconic red and black outfit is inspiring costume knockoffs worldwide. The good news is it won’t break your bank to mimic his look— opt for a red and black jacket paired with black pants and black shoes.

This is a good “outfit” for those who have to wear a costume (but who don’t really want to wear a costume). Opt for a Tune Squad short-sleeved jersey and shorts set and pair it with your favourite sneakers.

In another “non-costume” costume, channel your favourite on-screen football coach this Halloween in a shirt–crew neck sweater combo, and finish the look with a fake mustache.

Embrace your inner spy this Halloween in a form-fitting black jumpsuit, black combat boots, gloves and a sash, like Natasha Romanoff (Scarlett Johansson) in Black Widow. If you prefer the character’s white costume, opt for a snow-white jumpsuit, high top white sneaks and fingerless white gloves. If you can’t find a jumpsuit, a long-sleeve bodysuit top and matching tights would also work.